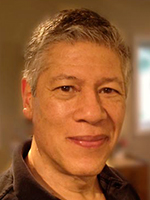 Ever wonder what people will say about you at your funeral?  Why wait?  That’s what REALTalk guest Robert Leung says.  Robert is a life coach and artist who’s been working on  the idea of ‘living eulogies’ for several years.  The process involves gathering your closest friends and asking them to write about you as if they’ll never see you again.  The consistent result, Robert reports, is increased intimacy, even among men.  Join host Susan McCabe as she explores the notion of eulogy as bond with Robert Leung.  It’s sure to be REAL.